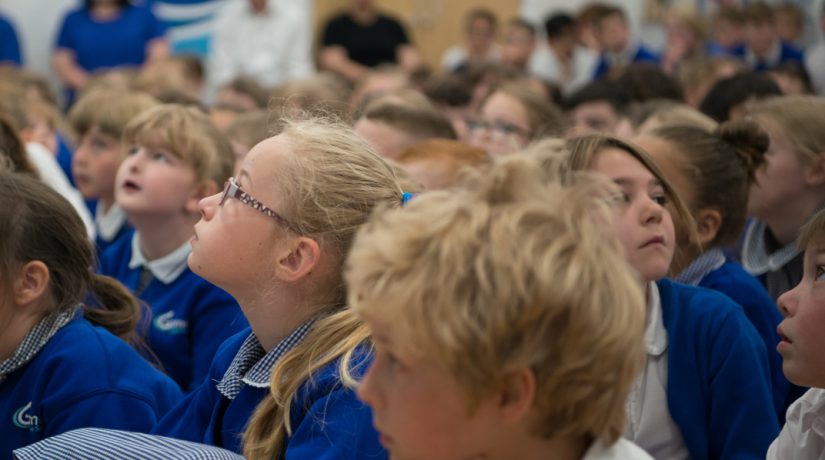 PIONEERING pupils at the forefront of technology education have been praised for being part of a ‘super school’ by a minister. Nick Gibb MP, minister for school standards, paid a visit to Gomer Junior School in Gosport yesterday. He toured the school hearing from senior teachers and youngsters about their science, technology, engineering and mathematics (STEM) projects. The visit was in recognition of the school’s excellence as a flagship school for Stem learning. Speaking to The News at the school, Mr Gibb said: ‘This is a super school in which the children are obviously engaged in STEM subjects.

‘It is important to develop STEM learning as the country are banking on the next generation of engineers.’ The pioneering school was recognised earlier this year with the accolade of Time Education Supplement STEM team of the year. Headteacher Georgina Mulhall said: ‘I am really pleased Mr Gibb has been invited to our school as recognition from central government and to hopefully secure STEM learning as a permanent part of the curriculum.

‘What we are doing is leading edge and I am incredibly proud.’ One of the fundamental principles of the school is to use practical tasks to develop ‘innovative thinkers and problem solvers’. As part of this children took on a project looking into devising sustainable sea defences at Stokes Bay seafront. Ian Potter, executive headteacher at the Gosport Fareham Multi Academy Trust, believes STEM learning plays a significant role in developing student’s cognitive ability

‘Learning STEM is not necessarily about becoming an engineer but it is about learning to think in an enquiring way and developing the habit of problem solving,’ said Mr Potter.

Mr Potter believes embedding STEM subjects at early age removes the gender perception as to what are traditionally male dominated careers. As former parliamentary under secretary of state for women and equality, Gosport MP Caroline Dinenage said this is particularly important. ‘It is important to embed STEM learning before children become subject to gender stereotypes,’ she said.